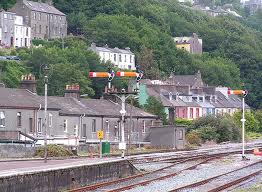 When I started some family research I had no idea that my relatives from Cork were all centred on Lower Glanmire Road. In some official documents it’s called Lower Road, as if everyone knows that further qualification is redundant. 19th century maps make this obvious though.

Looking at Google earth (for I have never been to Cork –yet) it is clear that the road is a major transport artery.
By the same token it’s hard to see how community and neighbourliness could thrive.

My great grandfather William C Toomey, aged 23, at number 38, married my great grandmother, Catherine Horgan, aged 19, at 84 Lower Glanmire Road on 15 October 1875, rather than at a church. Catherine had been baptised at St Finbarr’s .They were both living in the road; indeed her father (my great great grandfather) was a publican living at 101 (was there a pub there?) so you presume that they were local sweethearts. Sadly both fathers were dead by this time, 1875.

We know that Samuel Francis Horgan, the publican at 101, was married to Catherine Murphy and that they had at least four children. Samuel is recorded in Slater’s Directory as publican at 101 in 1870, but in 1871 Fulton’s Directory shows him at number 84. He was born in 1829 so when he died in 1873 he was a relatively young 44.

William C Toomey was born in Dublin, from where his father Denis Tuomey and mother Mary Bergin (and there are three variants to Twomey) came to Cork.

William and Katherine, aka Cate, had six children. (One of whom Samuel F was by tradition named after his grandfather).
Number 38 was rented from station master M.I. O’Callaghan and as the children were born at 35, 36 and 39 Lower Road I wonder if they shunted between rental properties owned by Mr O’Callaghan or the railways? Jane Crowley was an illiterate midwife for at least two births and presumably many Lower Road inhabitants came into the world with her care.

William worked on the railways. He was a clerk in 1879/80 but was an “Auditor” in 1881.Jane did not limit herself to motherhood. In 1875 she is recorded as Mrs C Horgan vintner and in 1881 and 1884 Directories as publican.  She died in 1905 aged 49 and obviously had a hard life. One wonders why a woman took over the business. Was it because of the absence of a suitable older brother as the custom of the time might have demanded? Katherine was probably the oldest child.

William and Catherine were living at 47 Lower Glanmire Road at the 1901 census (North East Ward) with six children. He is still a Railway Auditor in 1901. Son Denis, my grandfather, worked for the railways all his life and was a clerk, aged 20, in 1901.

By 1911 all six kids have flown the coop except Frances Toomey aged 20 who is living with her widowed father at number 47 ( now Cork no 3 Urban ward). Denis’ and his Mallow- raised wife Hannah Roche moved where the railways sent them from Cork to Waterford and Dublin and other places I cannot identify.

Denis was an “Auditor “ too by the time of his marriage in 1906 ,still based in Cork, and the couple were fortunate that both Dads were alive, even if Catherine Roche had died the year before.
In 1914 Denis Toomey was a railway agent. In 1935 he is listed in Guy’s Cork almanac as an agent for the London ,Midland  and Scottish  Railways, based at 118 St Patrick’s Street. This was not so far from Lower Glanmire Road but I don’t know if he still lived there.

One of Denis Toomey’s sons, Denis also worked on the railways and another, the eldest son, kept the names of his grandfather William C Toomey. The bare records provoke lots of questions. What was life like on this crowded and busy thoroughfare in an industrialised part of town?
Was it inevitable that William C started on the railways with Kent station nearby?
Was he working for the famous GS & WR with its local terminus?
Where were the Horgan/Toomeys buried if they were Catholics living at Lower Glanmire Road? William C died in 1922.

I cannot find Catherine on the on-line records for a likely place, St Joseph’s cemetery.
And finally, isn’t it about time I went to Cork?
James Alfred Denis McGrath