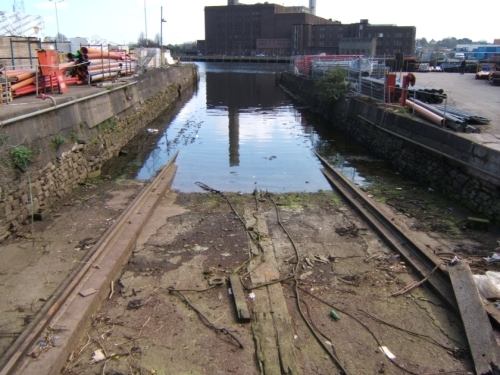 In the early 19th. Century, the shipbuilding yards on the Lower Glanmire Road (within St. Patrick’s Parish) were the most important in the country. By 1840, both Cork and Waterford were the pioneers of iron shipbuilding in Ireland.

Vessels of up to 500 tonnes could be repaired in both of Cork’s shipbuilding yards.

The Pike Family was the main contributer to the shipbuilding industry in Cork.

Their company was known as the Cork Steam Packet Company and had it’s main offices at Penrose Quay. Steamships were built and launched from their Water St. (off Lower Glanmire Road) yard.

The most significant family member in the shipbuilding business was Ebeneezer Pike. In 1871, the Cork Steam Packet Company was separated into continental and home line companies.

The home line was known as the City of Cork Steam Packet Company Limited, while the continental line was known as the Cork Steamship Company. Between 1848 and 1860, the following steamers were built by Mr. Pike at his Water Street yard, ‘Gannet’, ‘Cormorant’, ‘Falcon’, ‘Dado’, ‘Osprey’, ‘Bittern’ and the ‘Ibis’. All were Single Screw Steamers with the exception of the ‘Osprey’ which was a Paddle Steamer.

It is quite clear that with this level and type of industry, the introduction of adult and night classes at St. Patrick’s School with such subjects as shipbuilding, boilermaking, rivetmaking and carpentry would have been of distinct advantage to the Shipbuilding Industry within St. Patrick’s Parish.

It was also about at this time that Sherman Crawford Municipal Institute began taking an interest in Maritime Education.

It is to be assumed (for further research) that the beautiful and intriging ‘walkway’, some 500 metres or so, east of Water Street and leading from Lower Glanmire Road to Lovers Walk, known as ‘Beale’s Hill’, was name after the industialist Mr. Beale, mentioned above.

Joseph Wheeler began building and repairing ships in the early 19th century using derricks and slips on the Brickfield slobs off the Strand Road, Cork. By 1829 he had moved to a yard on the Lower Glanmire Road where he built a patent slip. In the 1850s he moved again, this time to a purpose built yard at Rushbrooke that was built around a large drydock designed by Sir John Rennie the Younger. While at the Lower Gleanmire Road yard, Wheeler built a number of wooden ships including his largest, the 500-ton Mary Hardy.

In 1842 Wheeler lived at 20 Grand Parade, Cork and in 1867 he is recorded as having lived at Westlands, Queenstown (Cobh)