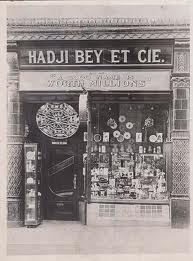 A sweet story from Cork

Made by an Armenian in the city of Cork, Hadji Beys Turkish delight has a story that beggars belief, writes MARIE-CLAIRE DIGBY , was once one of Ireland’s most successful exports, selling in Harrods of London and Macy’s in New York, and being supplied to Buckingham Palace.

Hadji Bey Milseáin na Tuirce i gCorcaigh is a TG4 documentary directed by RoseAnn Foley and presented by her sister Catherine Foley, which tells the story of Batmazian and his exotic sweetmeats. It is being screened tomorrow at 9.30pm (repeated on Wednesday at 11.30pm).

Two of Batmazian’s grandchildren, Dolores Cunningham and Derek O’Sullivan, also feature, and describe the difficulties their grandfather and his wife Esther had to overcome in their early years in Cork.

Having fled persecution in their homeland, the couple were mistakenly identified as Turks by soldiers returning from the first World War, and their shop on Lower Glanmire Road was burned down. When they reopened on McCurtain Street, Batmazian had a legal document drawn up, called Live and Let Live, which he hoped would explain his heritage and protect his business. In the event, his superior confectionery, made with ingredients imported from all over the world, spoke for itself, and became a firm favourite in Ireland and beyond.

More can be found here on the Examiner’s website also!