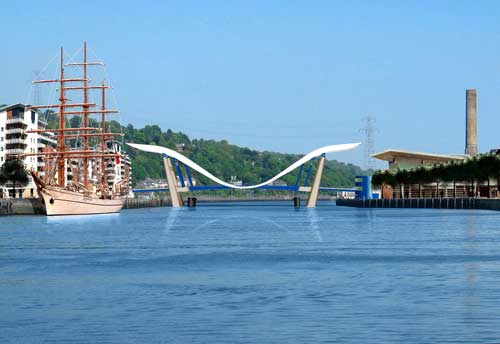 An application by Cork City Council’s Roads and Transportation Directorate for the following development was made to An Bord Pleanala under Section 51 of the Roads Act 1993 as amended by Section 9 (1) (e) of the Roads Act 2007 and by the Planning and Development Acts 2000–2006.

An Bord Pleanala held an oral hearing into the planning application and the C.P.O. of associated lands during 2008 and 2009 and a decision to grant planning permission was made in April 2010.

The Eastern Gateway Bridge is a proposed swing bridge and has been designed by Wilkinson Eyre bridge Architects and Arup Consulting Engineers. It is an iconic type structure with a single suspension cable support reflecting its important location at the entrance to the city.

Water Street Bridge is a Bascule-type lifting bridge. Its design is aesthetic, with a “seagull” profile to the overhead bridge structure.

The spine route network within the Docklands includes the following: