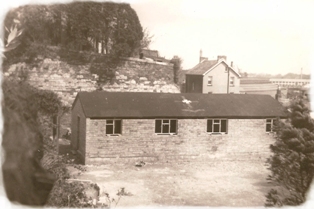 reproduced by kind permission of The St. Patrick’s Scout Unit.

Before Scouting moved into the Summerhill in 1931, the now Hut grounds was the site for The Summerhill Rail Station. The Line serviced the Cork to Youghal route in the later half of the 19th Century. The initial location of the proposed terminus was at the corner of St. Patrick’s Hill and MacCurtain Street, then known as King Street. The selected location though was at Summerhill, on a rock cut ledge overlooking the Lower Glanmire Road. The Summerhill terminus could accommodate two tracks, a simple station house, a goods shed and single passenger and goods platforms. Leaving Cork, the line ran parallel with Glanmire Road as far as Tivoli where the road crossed over it. Access to important residences on north side of line was also facilitated by three ornate cast-iron footbridges, which were supported on large brick columns. These still exist today.

The continuing relevance of the Youghal passenger line was called into question by a major accident which occurred at the single-line Summerhill station in 1882, when an arriving Youghal train collided with a Queenstown train at the platform. 100 people were injured in the crash, 30 of them seriously, and several thousand pounds in compensation had to be paid by the railway company. The limitations presented by the Summerhill station, which was built against a cliff face and so could never be extended, meant that it was struggling to cope with the nearly 40 daily train movements which passed along its single rail line. The opening of a new main line station on the Glanmire Road in 1893 led to the end of the Summerhill terminus. The Water Street Junction was constructed to the east of the main station, to connect with the Youghal line while the Queenstown lines were realigned in 1896 to allow trains to travel more swiftly from Cork Station.

The Cork, Youghal and Queenstown Railway:

Between 1854 and 1862, a rail link was constructed between Cork and Youghal. It was supposed to be the southern half of a proposed line between Waterford and Cork. The full line though was never constructed. Independent companies eventually completed the Waterford and Tramore section and the Cork-Youghal section. In the case of this latter section, work was sanctioned by Parliament in 1854 and a branch line to Queenstown was sanctioned in 1845. The first section of line to be constructed between Midelton and Dunkettle was awarded to Moores of Dublin who proved problematic and were replaced by R.T. Carlisle of Canterbury. This line was opened in November 1859, taking three years to complete. As a temporary measure, Cork bound passengers continued their trip in horse-drawn omnibus. By May 1860, the line had been completed to Youghal and to Tivoli in September. Eventually, in December 1861, the entire line was completed and first locomotive left Cork for Youghal.

In March 1862, the Queenstown branch opened but from here on in, the profits were hindered by financial problems. Eventually, the railway was sold to the Great Southern and Western Railway in 1865 for £ 310,000. From 1868 onwards, the Cork, Youghal and Queenstown (now Cobh)line could be taken at Penrose Quay. A connecting line was constructed at Grattan Hill. This crossed over a specially constructed lattice girdened bridge, which also spanned Hargrave’s Quay. Until 1877, a direct route could be taken from Queenstown to Dublin – Kingsbridge. The Summerhill station closed in 1893 and in February 1963, passenger services to Cork and Youghal discontinued. In 1992, Iarnród Eireann began to remove the rails on certain sections of the Cork-Youghal line. In recent years, the Cork-Cobh line has been re-established. (And more recently the Cork to Midelton line has been redeveloped and is now open again!)

The History of the Railway at a Glance

Cork and Youghal Railway company granted legislative sanction to construct rail links between CorkCity and the East Cork town of Youghal in 1854 Official opening of the Cork to Youghal passenger line on 23 May 1860 serving Dunkettle, Little Island, Queenstown Junction, Carrigtwohill, Midleton, Mogeely, and Killeagh en route. Carriages arriving in Cork drawn over temporary tracks by horses until the opening of the official City terminus at Summerhill in 1861 Queenstown branch line opens in 1862 1866, the Cork & Youghal railway Company find themselves in financial difficulty and are forced to sell their railway shares to the Great Southern & Western Railway (GSWR) Summerhill continued to be used as the City Terminus from trains arriving from Youghal until the opening of a main line station on the Glanmire Road in 1893 when it was abandoned.